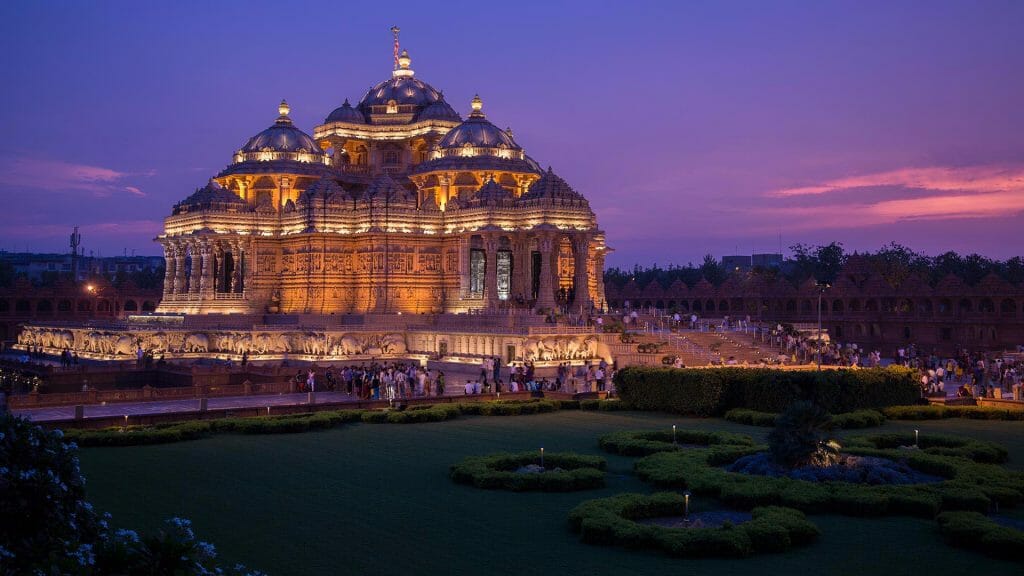 This post may contain affiliate links. We may earn money or products from the companies mentioned in this post. For more info, please read our full Disclosure here.

Everyone goes gaga over the Taj Mahal when visiting India, and for good reason. Aside from its elegant beauty, it is also the lasting symbol of an undying love. But for me, there is a temple that is far better and far more meaningful which tourists should definitely see. This is the Swaminarayan Akshardham Temple Delhi.

Also known as the Akshardham Temple, the wondrous structure is set on 100 acres of land off Delhi’s National Highway 24. It is primarily dedicated to the deity Bhagwan Swaminarayan, though there are representations of other members of the Hindu pantheon in the premises.

It is one of the biggest in the area, and carries significant pieces of Indian art and culture. Yes, I made note of that beforehand, so at least I made sure to dress up in my most comfy walking attire!

Here are just some of the reasons why the Akshardham temple is something every Delhi tourist must experience.

Akshardham Temple is a Must See

1. It is full of symbolism

Indian values abound in the temple. A good example is the structure’s Ten Gates, representing the ten principal directions and the Vedic ideal of inviting happiness and peace from everywhere.

One of the gates, Bhakti Dwar (The Gate of Devotion) enshrines the tradition of dual worship (worshiping both the god and his closest disciple). This symbolism is complete with more than 200 sculptures depicting this dual worship.

Since the temple is dedicated to Bhagwan Swaminarayan, his symbolism also lives here. He is considered the torchbearer of Indian culture, and his footprints are lain across the temple in white marble. These footprints bear the 16 sacred signs, signifying the deity’s holiness. It’s like I can feel a spiritual calm settle as I walked this.

2. It is meticulously beautiful

Color abounds in the Akshardham temple Delhi. The Mayur Dwar, for example, has gates showcasing the peacock — India’s national bird. Each of these gates have been carved with more than 800 colorful peacocks! You know how I love color! It’s just a shame photography is limited here.

There is also the Akshardham Mandir, which is an intricate structure at the center of the whole complex. It is built with white marble and pink stone, intricately carved with more than 200 pillars and 9 domes.

So many Sculpted Figures at Akshardham Mandir

The whole structure has more than 20,000 figures sculpted across it! This stands as a monument to Indian architecture, which is capable of creating such a wonder without the use of steel and other modern materials. Akshardham Mandir is open for visit until 6:30 PM everyday. It’s something you really shouldn’t miss.

There are many more grand constructions inside the temple. For example, Akshardham Mandir is located on the Gajendra Peeth, which is another structure more than 1,000 feet long. I’m glad I’m well-versed in long walks and hikes, so I can enjoy the scene without losing wind.

This one pays homage to India’s nature and the importance of its animals in its religious symbolism. The sculpture has more than 140 elephants and dozens of other animals, with a combined weight of more than 3,000 tons!

Finally, also in this area is the Parikrama, a two-tier colonnade with each one consisting of more than 1,000 pillars and almost 150 windows. Combined, the two tiers are 6,000 feet long!

The inside of Akshardham Temple is dominated by a statue of Bhagwan Swaminarayan. It is an 11-feet high idol, plated with gold from head to toe! The other idols surrounding him are not any less impressive.

A more subtle display of grandness is the Narayan Sarovar, which surrounds the temple’s monument. This consists of water taken from the 151 lakes and rivers that have been made holy by Swaminarayan’s visit. Can you imagine the continuous effort needed to transport the water, and ceremonially add it here?

The Sanskriti Vihar of the temple takes you on a 14-minute boat trip that shows the most significant achievements of the Indian culture. There are lively and accurate dioramas depicting the world’s oldest bazaar and Vedic village.

There is also the Takshashila, which is the world’s first university. There are also depictions educating the reader about the ancient discoveries of Indian saints. After all that walking, I’m glad I could see something while sitting down!

5. It does not shun technology

Unlike other historical monuments that keep technology to a minimum, modern trappings are fairly well-integrated in the Akshardham temple. The Sahajanand Darshan, for example, showcases the values of Bhagwan Swaminarayan using robotics, lights, and sounds.

The same high-tech treatment also applies to the Neelkanth Darshan, which takes the visitors on an epic and immersive theater experience following a true story about the life of an 11-year old yogi.

Outside, there is also a water show in the Yagnapurush Kund, a replica of the traditional yagna kund. The water show has lights, lasers, projectors, and fire. These happen every evening after sunset. Keep your eyes peeled here, people, as it’s a perfect way to end a day of touring Akshardham.

Things to know about the Temple

The Akshardham Temple Delhi can be easily reached since it is connected to the rest of Delhi via the metro. The nearest station is the Akshardham metro, just around half a kilometer from the premises. Akshardham temple timings and open hours are Tuesday to Sunday, and accepts visitors from 9:30 AM onward. Entrance is free.

Akshardham temple timings for exhibitions that are held at regular intervals starting 10:30 AM up until 6 PM. There is also a souvenir shop, which is open from 11 AM to 8 PM.

When going here, you’re not allowed to bring outside food. Disrespect or discourtesy of any kind is prohibited, in keeping with the holy nature of the grounds. You will also be asked to leave behind any electronic item, such as cameras, mobile phones, and the like.

Akshardham Temple does not Permit Electronics

While this may be a pain for the Internet generation (I feel you), it is nevertheless important so visitors could focus on the lessons and meanings in the temple.

Really, though, you could spend your whole day touring this place and you won’t miss your phone all that much (except for the part where you’re itching to post that perfect scene on IG, though). Of course, vices of any kind (alcohol, tobacco, drugs, etc.) are prohibited.

Akshardham temple also enforces a strict dress code. Keep in mind that India still has a mostly conservative society, so don’t show too much skin!

Dress for the Season

November to March is their cold season, so it is recommended to wear warm clothing. The heat peaks from April to June, so light clothes are preferable. Bring an umbrella if you’re visiting from July to October, since it’s monsoon season and the rains can be heavy.

The Akshardham Temple is a unique, engaging, and totally mesmerizing structure everyone should see. I’ll definitely come back if I find my way to this side of Delhi again. I’ve surely taken back not just memories, but also an inspiration or two!

Scroll back to top
157 shares