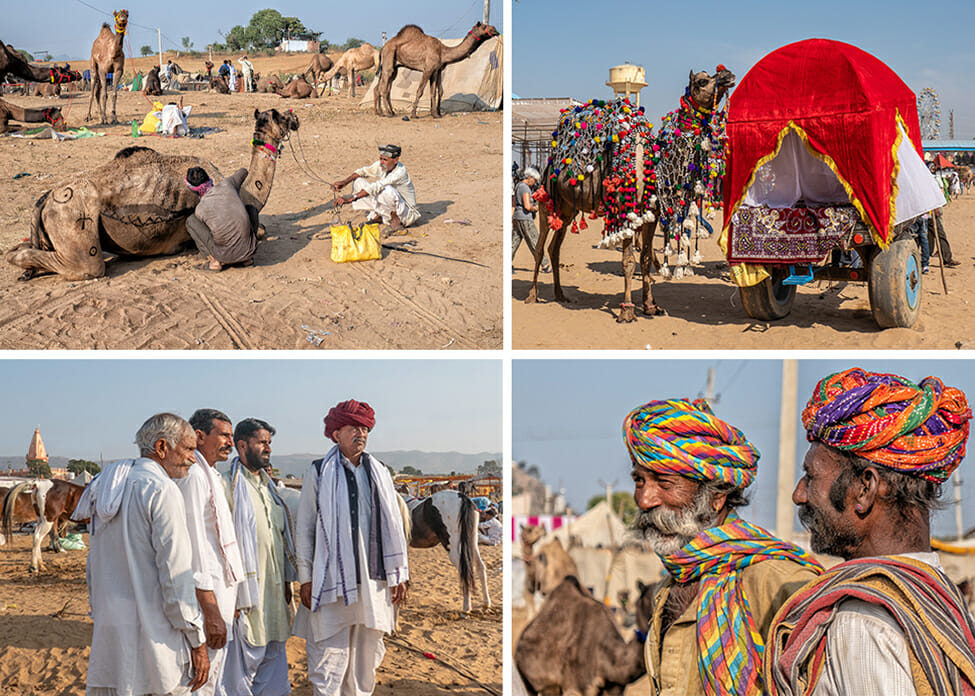 This post may contain affiliate links. We may earn money or products from the companies mentioned in this post. For more info, please read our full Disclosure here.

Every year, when the November moon is full, a camel fair takes place in Pushkar Mela Rajasthan, a small desert town in Rajasthan, India.

I had yearned to experience the Pushkar Camel Fair for decades because it’s one of the great tribal gatherings in the world. It lasts for nearly three weeks and also includes a popular Kartik Poornima, a Hindu Festival.

In March 2017, I booked a small-group tour with Explore!, a UK company I often use, which included the Pushkar camel fair in its itinerary. I waited impatiently for twenty months before departing in 2018, but if I hadn’t booked early, I’d never have got a spot.

The time lapse meant I could do research, study photos, and get excited. Of course, my 17-day tour included many other places in Rajasthan that I’d longed to visit — Jaipur, Jaisalmer, and Udaipur to name a few.

However, the Pushkar Camel Fair was the main draw for me. For centuries, the Pushkar fair has been attracting camel, horse, and cattle traders to buy and sell from tens of thousands of animals crowding the grounds just west of the town. I was there for the camels. And the photography.

Today the Pushkar Fair is also a major cultural and tourist attraction because, over time, events have been added, as well as bustling bazaars. The town swells by about 400,000 visitors over the festivities and beds are scarce.

Pushkar lies on a sandy plain beside a sacred lake and is surrounded on three sides by mountains, which act like a cauldron. It’s a place of shifting dunes, relentless heat, and little moisture — part of the Thar Desert.

Our small but comfortable tour bus wiggled through narrow roads on the outskirts of Pushkar eventually pulling to a stop at a gate where eight men in turbans and dhotis waited to assist with our baggage. We had arrived in time for lunch at the Royal Desert Camp, our home for two nights.

My Accommodations at the Pushkar Fair

My tent was more like a marquee with two camp cots and included a somewhat spartan but private bathroom. Hot water only ran in the morning and evening, but we did have electric light when there wasn’t an outage. Meals were buffet-style with a good choice of dishes, but no alcoholic drinks were available.

The camp’s free shuttle service to the fair was camel carts — we bounced along the rutted, sandy track on over-inflated tires while our driver hung onto his camel’s tail — uncomfortable but fun.

Pushkar Camel Festival – All you can see

I meandered through the half-full camel and horse camps that first afternoon as my camera slid in my sweaty hands and overheated. Images crowded my vision — camels being shaved and painted for the beauty contests; some being decorated for the Best-dressed Camel competition; a musician playing a haunting tune on an unknown instrument; tribesmen haggling over a young camel; and a tribal chief and his sidekicks assessing some thoroughbred Marwar horses. I was pleased we arrived for the first few days of the fair because later the trading slows down as the camels and horses depart with new owners.

The camels come from miles around and the carts, overloaded with camping gear and kids, are used as tents. Families cook, eat, and sleep underneath. There’s no sanitation or running water in the camps and no garbage collection either, so I watched where I stepped. Smells assailed me from all sides — burning dried camel dung, wood smoke, and Indian food.

The temporary markets around the camps were filled with stalls selling camel decorations, bridles and saddles, cooking pots, logs, and food — everything the traders and their families could possibly need for their stay.

As the Day Winds Down

As the sun set, smoke from the cooking fires filled the air, camels were fed, and men sat around smoking and gossiping while women cooked their meals. After taking many more photos, I was weary and dirty as I walked back through the market to catch my camel shuttle. I couldn’t wait for a shower and dinner. The temperature was dropping.

Up at sunrise for another busy day, I checked my camera and empty memory cards. We were dropped at the crossroad in the camel camps and walked into the town of Pushkar past more market stalls. These were selling clothes, food-to-go, even swords and daggers.

The town’s shops were opening too, blaring competing tunes from loudspeakers, and tourists spilled out of hotels as we made our way to the ghats. I could see a blur of orange and magenta as we neared the lake — marigolds and bougainvillea floating in the water.

Shoes off. I carefully stepped down the steep ghats.
“No photos of the women as they bathe,” a man yelled at me.
I hid my camera.

This is a holy place of pilgrimage where Hindus flock to bathe in the sacred lake, said to have been created by Lord Brahma when he dropped a lotus flower. The faithful cleanse their sins here and make offerings at some of the 400 temples, one of which is dedicated to Brahma, the lord of creation.

I hastened away from the man who yelled, took some photos of the town behind women who were not in the lake but had just dried off, and hid my camera again.

On to the Excitement of the Pushkar Fair Stadium

My next stop was the stadium where all the camel contests and races take place. On the way, I saw a family of pigs ambling down the main street followed by a two-ton water buffalo and his handlers. He won his contest later.

The arena was lively and my camera was overheating again. Young men showed off their riding skills on spirited horses, a tight-rope walker wobbled, horses and camels danced to ear-splitting music, peddlers hawked cheap wares, and the decorated camels waited patiently to be judged. I found it unusual that the crowds could be in the arena and not confined to the stands, but it certainly made for better photo ops.

A snake charmer wanted money for a photo. The winner of the best-decorated camel was paraded around as others cantered past showing off for the next day’s races.

Hot, I drank a quart of lemonade as I people-watched. My too-short time at the Pushkar Camel Fair was nearly over and I thought, “How little it’s changed in centuries. If it wasn’t for the motorbikes and mobile phones, today’s would be exactly the same.”

1 thought on “Two Days at the Pushkar Camel Fair”

Scroll back to top
152 shares